With globalisation, a higher standard of living across the world, low-cost airfares, highly competitive hotel prices and tourist agencies that are prepared to organise all aspects of travelling abroad, people nowadays travel more often and further away from their home than ever before. This also means that the possibility of travellers understanding the language of the country they choose as their travel destination gets lower and lower.

Not knowing the language can cause many problems for tourists (or their daughters*), and one of the most frustrating is definitely ordering food in restaurants. Since the menu is the basis of communication between customers and restaurants, more and more restaurants nowadays decide to offer their customers menus that are translated into various languages. Below are 7 good reasons for hotel restaurants to do the same.

*A little personal story: My parents grew up in a time when French and Russian were the languages studied in school and since they haven’t used any of them in many decades, they have reverted to their monolingual status of Romanian speakers. A few years ago, they went on a trip to Tunisia (I may be mistaken) and my dad tried to buy (probably even haggle – not very successfully I’d say) a gift for his beloved daughter. Since the seller did not speak Romanian (why would he?) and my dad did not speak any of the languages the seller did (who was multi-lingual apparently), my dad ended up buying an overpriced hideous handbag (which still lies at the bottom of a box somewhere, never to be worn). In case you are wondering, my dad does not read the blog, nor does he speak English, so he’ll never know how I feel about the bag :).

#1: To create a good first impression

The menu is usually the first thing customers are interested in when choosing a restaurant. A menu that foreign customers can understand builds trust immediately and can thus often be the main decisive factor in choosing a hotel restaurant over numerous other options that are available to tourists. A good translation can make all the difference. A bad one can lead to laughter but also lost credibility. 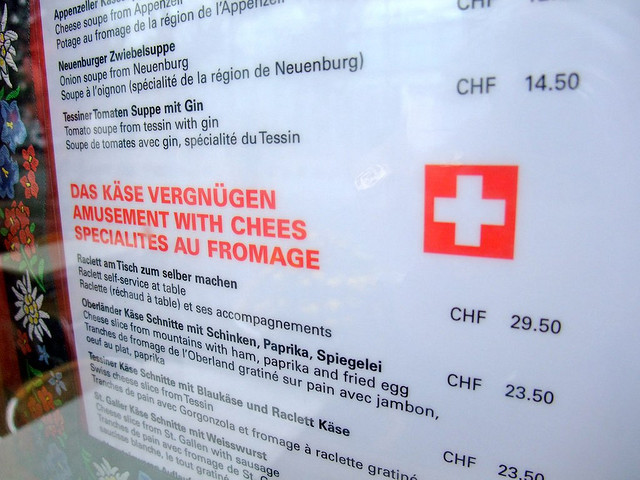 #2: To expand customer base

According to the data on inbound tourism in the UK provided by the Office for National Statistics, there are over 30 million visits from abroad each year which add up to more than 200 million nights that foreigners spend in the UK. Looking at these numbers, it is clear that the potential for attracting foreign customers is huge – and by providing menus in various languages hotel restaurants can definitely expand their customer base greatly.

Travellers who have travelled abroad know how frustrating it can be to eat in restaurants that do not offer their services in other languages than their native language. Only a small part of travellers fully understand the local language and even a smaller part knows about the local specialities, so choosing and ordering food often demands a lot of effort and causes a lot of confusion in the process. And confused customers are definitely not happy customers!

*Another little story (involving my parents again): Many years ago (their language skills were still limited to Romanian), they went to… (I can’t remember where, they travel a lot) and inadvertently ate certain frog parts, which they would never have done had they known what the menu said.

#4: To decrease the possibility of misunderstandings and complaints

Foreign customers that are confused about choosing and ordering food are also far more likely to complain about their food or restaurant service in general. Furthermore, misunderstandings are not only unpleasant for the customers and the restaurant staff involved, but also for other restaurant guests who might be discouraged from returning there.

Negative reviews can have a huge impact, leading to big losses, as a study has shown.

Modern tourists are very demanding. They expect restaurant and hotel services to be of the highest standards and menus that they can’t understand certainly don’t meet their high expectations. With the tourism industry being so competitive nowadays, any restaurant that doesn’t meet all customer expectations quickly faces customer dissatisfaction and, in the long-term, also lack of customers.

All the things potentially caused by restaurant menus not being translated in languages that foreign customers can understand – bad first impression, smaller customer base, misunderstandings, customer confusion and customer dissatisfaction – in the end translate to customers choosing other restaurants and thus decreasing the revenue of hotels. Since investment in translating menus into different languages is very small compared to the potential of increasing revenue by offering services to foreign tourists, it certainly doesn’t pay off to be too tight in this area. You know what they say, you get what you pay for (and the pictures above at #1 are pretty good examples).

#7: To preserve the reputation of both the restaurant and the hotel