Halloween – History and Customs around the World

Contrary to what many people think, Halloween is not the exclusive festival of the Christian West. In fact, not many people are even aware that it originates from “pagan” roots before the advent of Christianity. In its many forms, the festival of ghouls and ghosts is present in nearly every country in the world. In many parts of the world is has deep religious significance; in others, it is a season of fun and festivity; in yet others it is a remembrance of ancestry. Even the dates on which it is celebrated differ from culture to culture. With such a diverse history, the season of Halloween deserves significant attention. In this article, we explore the fascinating origins of this festival and the many ways in which it is celebrated around the world.

It is popularly believed that the festival now called Halloween originated before the birth of Christ. During pre-Christian Celtic times, it was known as Samhain – pronounced ‘sah-win’ – and, although the records are not very clear, it is known that Samhain, which means ‘summer’s end’, marked the end of the harvest year. At this time – November 1 according to the modern calendar – the community gathered resources and brought back all the grazing cattle for the winter ahead. More relevant to the Halloween of today’s popular culture, it was believed that on this day, the spirits of those who had passed on transitioned to the other world. This seems to be the origin of the supernatural associations of modern-day Halloween; but in different parts of the globe, it is celebrated in many different ways.

Halloween is a contraction of the term All Hallows’ Evening, and is the night preceding All Hallows’ Day, also known as All Saints’ Day. In the United States and Canada, it is marked by a tradition known as ‘trick or treating’, in which children dress up as witches, ghosts and monsters and go from house to house collecting sweets or candy. Homeowners are often ‘tricked’ if they don’t keep a ready supply of candy in the house. These traditions, however, did not begin until the middle of the 19th century, when the Irish Potato Famine brought thousands of immigrants to American shores. But even then, it was only celebrated as a religious festival rather than the almost secular form it has taken today; however, all modern customs associated with Halloween have borrowed in some way or other from their European cousins.

In England, the eating of ‘soul cakes’ and going ‘souling’ is believed to have given rise to the North American tradition of trick or treating. In Scotland, during the 16th century, pranks were played during the night before All Souls’ Day – a reference to the mischievous deeds of witches and devils.

In Russia, the celebrations are much more recent, having started in the 1990s. However, certain powers in the country are attempting to wipe out public observance of Halloween as part of a drive to eliminate Western celebrations. This has not stopped thousands of youngsters from partying all night in ghoulish costumes and enjoying the revelry of Halloween.

In old-world Europe, the traditions are much grander and sometimes more sinister. For example, in Romania, where the myth of Dracula is said to have been born, the Transylvanian citadel which is the birth place of Vlad the Impaler (the inspiration behind the fictional character of Dracula created by Bram Stoker) is home to one of the hottest happenings in the world on Halloween night – a recreation of the witch trials that occurred there many centuries ago.

In Ireland, costume parties, fireworks and bonfires are customary, especially in the city of Derry, said to be the location of the largest Halloween celebration on the island. Games such as bobbing for apples are very popular as well. However, this night is known to be especially dangerous because of the fireworks (now illegal but smuggled in from Northern Ireland) and bonfires – the Emergency Services say that October 31 is one of the busiest nights of the year.

In countries like China, Japan and Singapore, it has been foreign influence more than anything else that has stoked the popularity of Halloween. Children studying in international schools are more likely to participate in such celebrations rather than those studying in traditional local schools, for example. In the Philippines, however, the festival still enjoys widespread, albeit diminishing, popularity.

This is the one part of the world where Halloween is actually growing in momentum as a global festival rather than one that has a strong American pop-culture influence. Again, as in the case of Russia, it is the youngsters who participate in the festivities.

In general, it is accepted that Halloween is dedicated to the souls that have passed on to the other side. Christian tradition often blends in with secular or other religious beliefs in that it is the night on which those who have died are remembered by their families, and their souls are watched over while the transition of seasons dictates their own migration to the netherworld. Irrespective of the religious references, globally Halloween is considered special for this reason.

In practice, however, Halloween is celebrated in more ways than possibly any other religion in the world barring Christmas. Even within Christianity, observances range from fasting, praying and attending religious services to dressing up as bible characters and having children build altars for the souls of dead children to visit. In some Christian communities people abstain from meat, eating only pancakes and a preparation with potato and cabbage called Colcannon.

In other religions, reactions to the tradition of Halloween range from allowance to participate, to sternly disapproving all association with it. In orthodox Judaism, for example, it is said to be a violation of the Halakha; yet, modern Jews in North America and even Europe often participate in the celebrations, if not the religious ceremonies associated with All Hallows’ Eve. Also, the Jewish festival of Yizkor is akin to Allhallowtide, which is the three days from Halloween to All Souls’ Day.

In Islam, the celebration of Halloween is neither expressly forbidden nor openly encouraged. As a result, there are opposing sentiments that argue for and against participating in what is now considered a secular celebration of fun and frivolity.

Hinduism does not take sides either; here, too, there is a dichotomy of thought in regards to following Western traditions such as Halloween. However, the festival of Pitru Paksha is very similar in that it pays homage to the ancestors of the living.

Samhain in its newer forms is still celebrated by neopagans such as Wiccans, and is celebrated on the same night as Halloween. As you will remember, Samhain is actually the predecessor of Halloween.

No, this does not refer to the non-partisan body governing the goings-on of the globe! It refers to the common thread that binds nations celebrating this unique festival of souls. From England to Ecuador and from America to Australia, Halloween’s allure emanates from its reference to life after death. This subject has mesmerised mankind for millennia past, and continues to tantalise the thinkers of today. It is this association that most powerfully brings nations together in the celebration and observance of this singular festival that is known by many names and is represented in many forms.

Halloween today is seen by many to be either a commercial enterprise scavenging on the human mind’s fascination with the dead, or an encroachment upon older and more orthodox traditions by a Western, Christian society that has wiped out scores of other traditions and cultures. The charm of Halloween, however, is definitely here to stay. In fact, the more controversy the older generations create around it, the more attraction it holds for the younger ones.

The question now is not about its survival into the 22nd century; it is merely a question of how it is celebrated. It has immersed itself far too deeply into the fabric of global society to do the very thing it celebrates – the passing on into the hereafter. 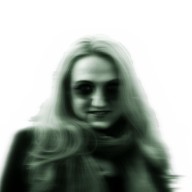 Alina Cincan
Death, blood and all things ghoulish haunt my dreams. Today I will be haunting you. Beware!

Halloween – History and Customs around the World